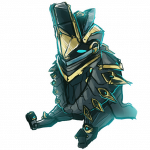 : Smacks weapon off the ground generating a short shockwave.

: Several repeated slashes to the front in a cross pattern followed by a powerful punch that knocksback foes.

): Pole-vaults with the weapon, ripping it out of the ground in midair to draw into a spinning cleave, repeated presses extend the spin and finish it off with a downward strike that generates an electrified shockwave.

: Rips up the ground with an explosion, tossing enemies into the air, user then launches weapon like a javelin into the air.

: Spins spear on right side before making a low 360-degree spin, slowly rises up right while spinning halberd overhead, cleaving through enemies with a powerful tornado.

: An upward left slash followed by an upward right slash and then a horizontal slash from left to right. The weapon is hammered down in an extended overhead cleave, user kicks the lowered weapon into a short spin to strike with the blunt side before finishing off with a wide swing.

: A heavy jab with the left shoulder of the user.

: A downward smash with the weapon.

Switch Attack: Three light swings followed by a 180-degree shockwave generated by a roar.
Storm Rush: Several horizontal left-right slashes followed by an upward slash that sends enemies flying.
Variable Counter: Stops enemy with a pommel strike before sticking a foot into their stomach and another on their head, user jumps into the air to smash the opponent into the ground with the weapon.

: An anticipated swing to the right, then another to the left.

: Six swings to the right.

Retrieved from "https://koeifanon.fandom.com/wiki/User:Zf6hellion?oldid=5833"
Community content is available under CC-BY-SA unless otherwise noted.